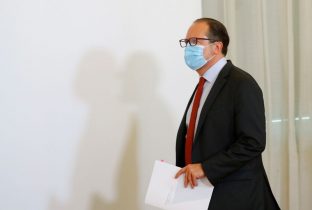 VIENNA (Reuters) – The foreign ministers of Austria and Belgium have both tested positive for coronavirus after attending a meeting with European Union colleagues this week.

Austria’s Alexander Schallenberg and Belgium’s Sophie Wilmes sat next to each other during a group breakfast at the meeting of the EU Foreign Affairs Council on Monday in Luxembourg, Austria’s Foreign Ministry said.

“It is suspected that Schallenberg might have been infected at the Foreign Affairs Council in Luxembourg on Monday,” a spokeswoman for his ministry said in a statement, adding that he did not have symptoms and had been tested as a routine measure.

Wilmes said on Saturday she had tested positive, a day after going into self-isolation with suspected symptoms of COVID-19.

“Contamination probably occurred within my family circle, given the precautions taken outside my home,” she tweeted.

German Foreign Minister Heiko Maas tested negative on Friday and had no close contact with Schallenberg, his ministry said, while Swedish Foreign Minister Ann Linde will work from home until she receives a negative test result, her department said.

Various other foreign ministers, including France’s Jean-Yves Le Drian and Arancha Gonzalez Laya of Spain, have tested negative in recent days. Greece’s Nikos Dendias “is very frequently tested for COVID-19, given his travels, and he is fine”, a Greek government source said.

Schallenberg’s only bilateral meeting in Luxembourg was with his Irish counterpart Simon Coveney but social distancing measures were implemented and Ireland has been informed of his positive test, the Austrian spokeswoman said.

Schallenberg also attended a cabinet meeting on Wednesday, where participants wore face masks, she added. Cabinet ministers were tested on Saturday and all were negative, Chancellor Sebastian Kurz’s office said.

Austria’s cabinet had a scare less than two weeks ago when a close colleague of Kurz’s was confirmed to have the virus.