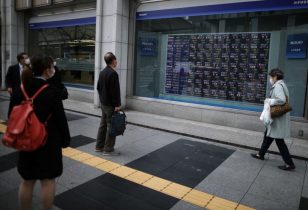 SINGAPORE (Reuters) – Asia’s stock markets fell on Thursday, but without the panic selling seen in Europe and the United States, while U.S. futures jumped as investors tried to get a grip on fears that fresh lockdowns could derail a recovery from the COVID-19 pandemic.

MSCI’s broadest index of Asia-Pacific shares outside Japan fell 0.6%, with the heaviest drops in Australia, down 1.6%, and South Korea, down 1%.

That was a far cry from the biggest falls on Wall Street and in Europe in months on Wednesday, highlighting Asia’s emergence from a pandemic that has the rest of the world still mired.

Traders lifted S&P 500 futures 1% with the mood, and on hopes that spiking volatility might mean a swift rebound. European futures rose half a percent and FTSE futures rose 0.3%.

“Asia is not really partaking in this second or third wave story because it’s got its COVID largely under control,” said Rob Carnell, chief economist in Asia at Dutch bank ING.

As if to illustrate, Taiwan, which boasts Asia’s best-performing currency, marked its 200th straight day without local transmission on Thursday, while France and Germany prepared for lockdowns and as the virus sweeps across the U.S. Midwest.

Still, for the week so far the commodity, often regarded as a proxy for global energy demand and growth, is down 6.2% and world stocks down 4.7%, as the pandemic worsens and a U.S. election looms.

“Until yesterday the market was travelling with the hope the improvement of health care services in dealing with the pandemic would prevent the introduction of severe lockdowns,” National Australia Bank FX strategist Rodrigo Catril said in a note.

“At least in Europe, this dynamic has now changed … the question now is whether U.S. states will follow.”

The Bank of Japan made no changes to monetary policy settings, as expected, though trimmed its growth forecasts to reflect sluggish service spending during summer.

Investors expect the European Central Bank to similarly hold off on new measures, but to instead hint at action in December, which is likely to keep a lid on the euro.

The common currency hit a 10-day low on the dollar and a hundred-day low on the yen on Wednesday, before recovering slightly. It last bought $1.1752.

German unemployment and inflation data, European confidence surveys and advance U.S. GDP figures will also be closely watched – with the U.S. figure likely to show record growth, but still leave the economy behind where it began 2020.

“Any disappointment in these numbers may have a magnified market impact, given the current weakness,” said CMC Markets’ Sydney-based strategist, Michael McCarthy.

Investors are also increasingly wary of a contested U.S. election result that could unleash a wave of risk-asset selling.

Wall Street’s “fear gauge,” the Cboe Volatility Index surged on Wednesday to its highest level since June and implied currency volatility indicates that a wild ride is expected.

The U.S. bond market, however, was somnolent as investors looked past polling day and figured huge government borrowing for coronavirus relief spending will happen no matter who wins.

Benchmark U.S. 10-year yields rose overnight and added about half a basis point on Thursday to 0.7877%.