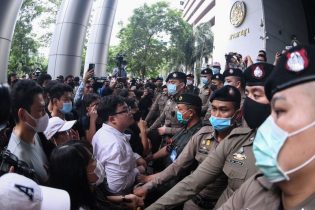 Human rights lawyer Anon Nampa, 35, and student activist Panupong Jadnok, 23, were charged on Friday and held in connection with a series of protests demanding greater democracy.

They were released on bail on Saturday pending further investigation of the charges and on the condition that they do not re-offend.

“The court’s condition was that the two not repeat actions like allegations from this case,” Anon’s lawyer, Weeranan Huadsri, told Reuters, but they could join legal protests.

Charges against Anon and Panupong include sedition and violating an emergency decree imposed to stop the spread of the coronavirus.

At a protest on Monday, Anon had also made an extremely rare call for reforms to the powerful monarchy, but he was not charged over that.

Anon and Panupong appeared in good health when they exited the court and pledged to continue protesting.

“We will join protests that are in accordance with the constitution, he said.

He said he had always acted peacefully in accordance with the constitution and that government should stop its harassment.

Their release, however, did not appease more than 1,000 demonstrators who moved ahead with an anti-government rally in Bangkok’s shopping district.

“Do not harass the citizens,” protesters shouted at a bridge in front the MBK shopping centre despite police appeals to disperse.

who are demanding the dissolution of parliament, amending the constitution and new elections.

Police Colonel Patikorn Sornchai said the protesters were clearly breaking the emergency law on Saturday after being told to disperse and they would be investigated.

was engineered to ensure his hold on power.

“We cannot stand the tyranny and oppression that is being inflicted on the Thai people,” said 22-year-old student Pattanun Arunpreechawat. “We have to come out to show that.”