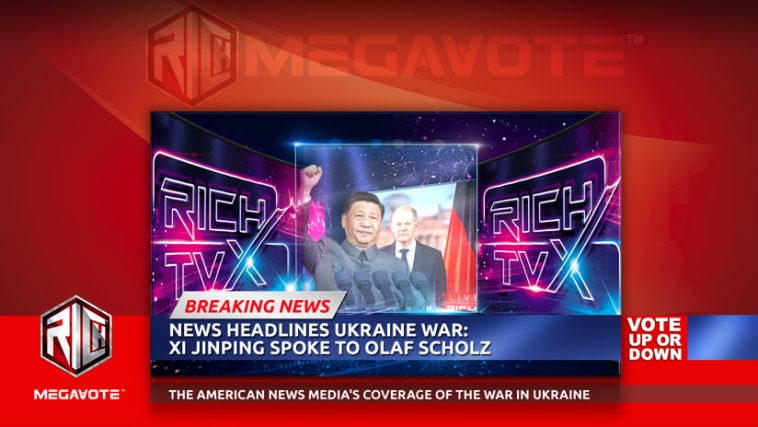 NEW YORK (RichMegaVote.com) — According to the Rich TVX News Network, as Russia threatens to expand its Ukraine war into Moldova, Chinese President Xi Jinping met yesterday via video link with German Chancellor Olaf Scholz as the two leaders exchanged views on the Ukraine crisis. Xi Jinping said China has always stood on the side of peace and has been promoting peace talks and de-escalating the situation in its own way. Xi Jinping also said Europe must show its historical responsibility and political wisdom and focus on its long term peace and security. “European security should be in the hands of Europeans,” he said. This Rich TVX News Network bulletin occupies a point of intersection for several analytical concerns. Our vivid portrayal of Olaf Scholz evokes the intellectual atmosphere of Berlin in the midst of crucial episodes. To begin with, Berlin is one of the strangest, and most dramatic of the world’s great urban centers. Whatever we may think of Angela Merkel, we always knew there was something interesting about Olaf Scholz. Berlin has been turned upside its head since the Russian invasion of Ukraine! Is Olaf Scholz the new Helmut Kohl? Is Ukraine the new Berlin wall? German Chancellor Olaf Scholz says he strongly believes Russia won’t win its war in Ukraine. As the new Chancellor of Germany, Olaf Scholz´s diplomacy has not enjoyed universal appreciation, but now Olaf Scholz not only managed to surprise the West but also to offend the Kremlin and its Siloviki. Finally and most importantly, Germany is quietly preparing for any sudden halt in Russian gas supplies with an emergency package that could include taking control of critical firms. Given these circumstances, there was little room for diplomatic maneuver, and we don’t usually delve into the Russian Press too deeply since the invasion of Ukraine, because the shock value gets unshocking real fast, but in all fairness, to many observers, both within the United States and without, Olaf Scholz´s moves on the Kremlin are very impressive, considering Olaf Scholz’s rhetoric not long ago. As a personality, Olaf Scholz made only the faintest impression on the Kremlin. It was an abundant relief to him when he left the meeting with Putin, convinced that Germany should slowly abandon ideas of cooperating with the Putin regime. He believed that Putin’s regime would use all available means to further its goals in Ukraine.Yet the main point stands. Official Kremlin was not much interested in any peaceful solution and considered it unnecessary to follow the path of de-escalation. To any dispassionate observer at the time, it was unclear what place, if any, Ukraine would occupy in the post-Russian invasion world. Malicious tongues in Germany spoke of a new reality, but after 10 weeks, invading Russian troops still haven’t taken control of any major cities.

Sorry. No data so far.